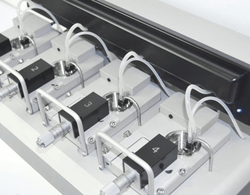 The solution is the Buffer Filler System - 625FS - an add-on that provides an automatic, reliable and consistent way to replace buffer in the chambers of your 4-Channel Myograph System.
​
​The Buffer Filler system is easily ‘clicked' onto your 4-channel Myograph System. It  can fill one chamber of choice separately or all 4 baths simultaneously with buffer by a single touch of a button. It can apply two different volumes of buffer. The standard setting is 6ml and 8ml buffer but other volumes, however, can be requested if the standard settings do not meet your needs.
​
WASHING FUNCTION
Washing the tissue preps is a substantial part of normal myography procedures/protocols, potentially involving up to several hundred washes, depending on the protocols. Washing is therefore, one of the major time-consuming steps that can introduce errors in volumes. Reducing this error is essential when concentration-dependent responses are being measured and can be reduced using the Automatic Buffer Filler System. In addition to reducing error, it will reduce the time involved during washing protocols. Chambers can be emptied with a touch of a button on the interface, and chambers can be re-filled with a touch of a button on the Automatic Buffer Filler System. This results in decreased perturbation of the mounted tissue and force transducer, thereby increasing the success rate of your experiments.
RELIABILITY & CONSISTENCY
​The Automatic Buffer Filler System is built with technology that increases the reliability and consistency you need while filling the chambers, thereby reducing the likelihood of user-error and creating more reliable and consistent results between the four myograph chambers.
CLEANING & MAINTENANCE
​The Automatic Buffer Filler System will make cleaning faster and easier because of the simple one-touch button features of the filler combined with the already existent one-touch vacuum function.
WORK LOAD RELIEF
​The Automatic Buffer Filler System can potentially reduce injury caused by daily repetitive motions associated with manual pipetting.